What is Tennis Elbow ?

What is Tennis Elbow ?

The elbow joint is surrounded by muscles that provide movement for the elbow, wrist and fingers. The tendons within the elbow connect the bones and muscles, and operate the muscles of the forearm. Tennis elbow is the name given to overuse of the arm, forearm and hand muscles, resulting in elbow pain. It became known as such due to its prevalence among tennis players.

Symptoms of tennis elbow typically include:

Tennis elbow is typically caused by over-activity of the surrounding muscles, which are used to straighten the wrist. If the muscles and tendons become strained or sprained, small tears and inflammation can occur around the lateral epicondyle on the outside of the elbow. As the name implies, tennis elbow is often caused by playing tennis. However, it is also caused by other activities that involve repeated pressure on the elbow joint.

Tennis elbow is self-limiting, meaning it will eventually resolve without treatment. Despite this, there are treatments that help improve the symptoms, reduce the pain and accelerate recovery. Be sure to cease any aggravating activity and rest the injured arm. In most cases, tennis elbow lasts anywhere between six months and two years. Ninety percent of cases see a full recovery within a year.

The PRICE approach is recommended by NHS Choices: 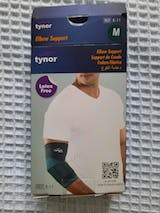